The past few weeks have been quite a ride. I've not had so many good things happen in such a short space of time before!

With everything going on, I just felt the need to write this post as a journal of how things were, how things felt and to remind myself that things are going just about as well as they can be for me and my bubble right now. I'm grateful.

I gave my first ever keynote talk at a conference.

It was an online talk, and it was a talk I'd delivered before: Dungeons, Dragons & Developers.

The organisers of the conference had such good feedback about the content, style and delivery from a previous time I'd given it, that they saw it as a keynote-worthy talk. I was flattered and jumped at the chance to give one of my favourite talks again!

I got a great response, and thoroughly enjoyed representing wizards while wearing my hat! 🧙🏻‍♂️

"The best software is the software that is never written."

I married the love of my life.

We'd originally planned a wedding in September with around 100 people. With the uncertainty of the world at the start of 2021 we decided to re-schedule and elope with just a small group. We ended up telling close family members, so they were aware of what was happening.

It was my wife, myself, her man of honour, my best woman and my best woman's husband - plus our incredible photographer!

Weather worries, a tight deadline for my wife (is it weird that it feels a little weird saying that word, but at the same time it just feels so completely right?) to make her INCREDIBLE wedding dress (seriously... she got offered a job due to how good it is!) as well as my waistcoat, 3 bow-ties, 5 masks and a dress for my best woman, and some family-feelings wobbles about us down-sizing the day weren't enough to stop what was the best day of my life.

The weather held out, the dress got made (holy shit I was about to cry when I turned and saw her for the first time, but she immediately told me to stop or she'd cry too and ruin her makeup!), the family stuff came and went, and what matters is how we feel. That day was for no one but us.

Also seriously check out some of these bomb-ass photos that our photographer sent over as a preview from the day!

We weren't allowed to do a walk-down-the-aisle entrance, so we did a 'first look' in the castle grounds instead: 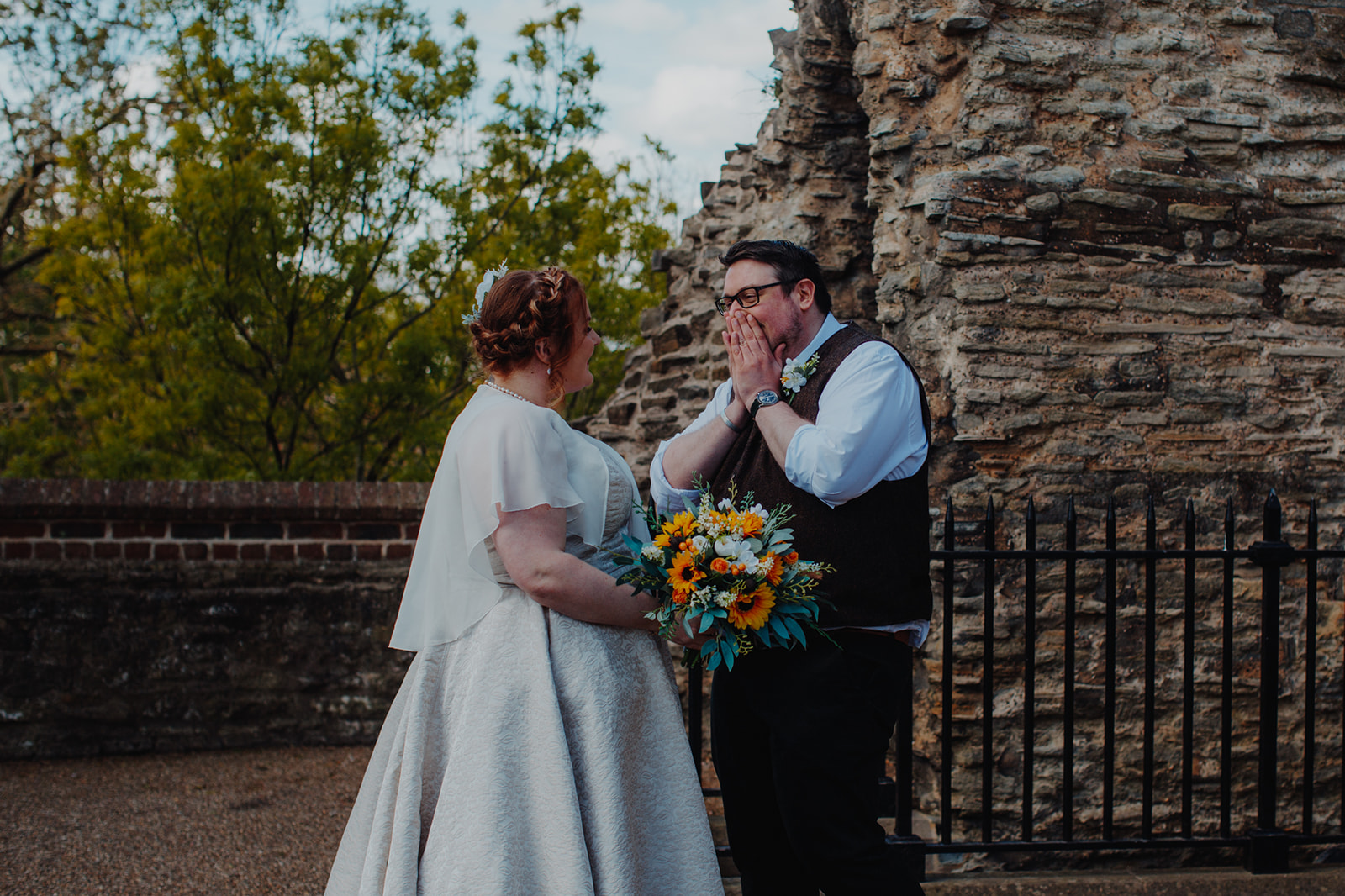 A part of me wants this next one as a big painting in a fancy frame in our future-house: 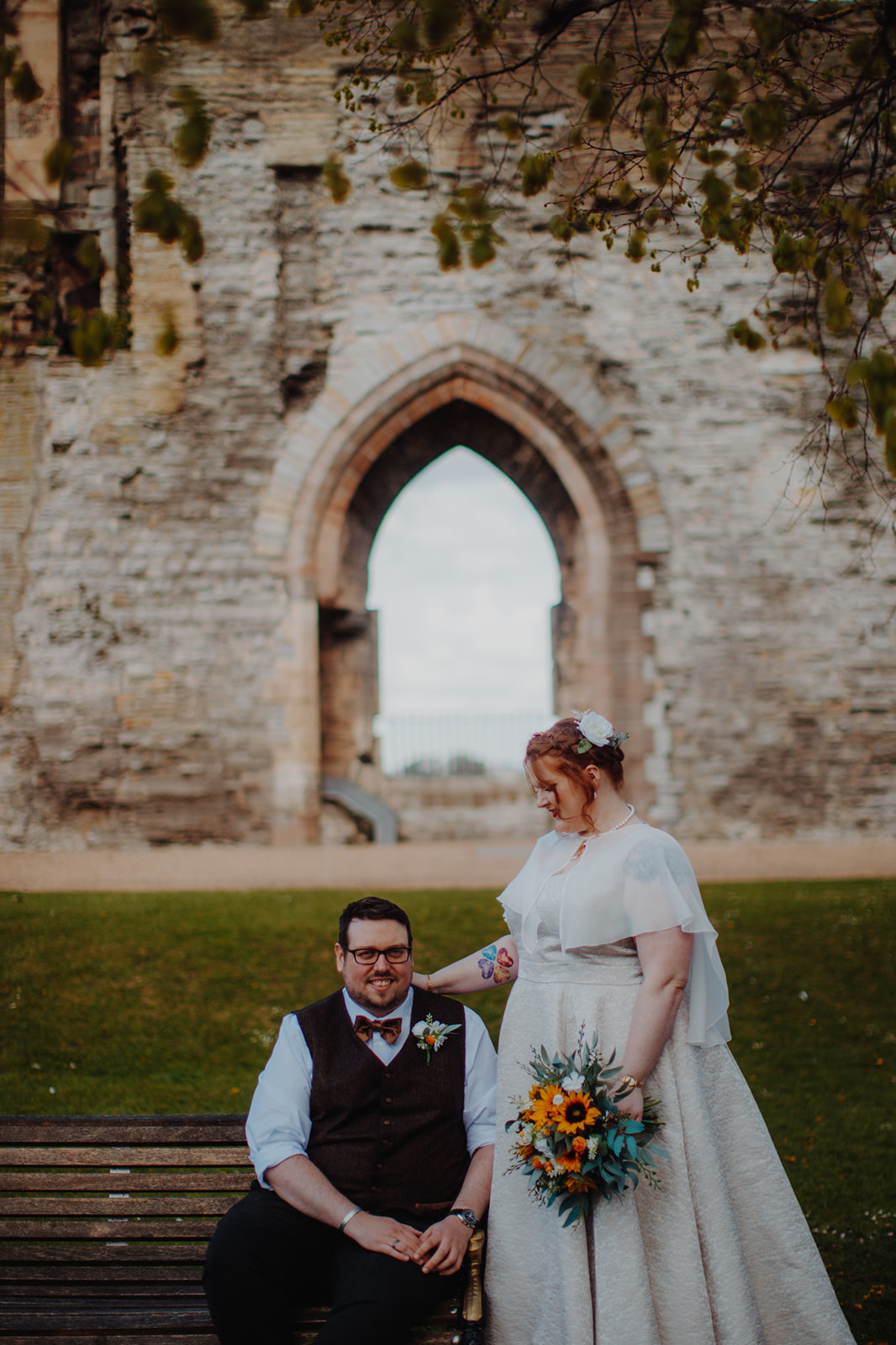 My team leader had confirmation through of the promotion I'd been working towards.

It's something we both wanted. I wanted to step up and push myself more. He believes in me, and in my ability to do it (I keep the ship afloat when he's on holiday)

My previous role was "Senior Software Engineer and Community Evangelist" - at times this felt like I was trying to be 50% project manager, 50% team lead, 50% developer and 20% community advocate.

It didn't add up. Stretched thin and not able to focus on one area. I wanted to get back to what I loved doing, writing code. So when I took the role with my current company, someone asked "does it not feel strange taking a step backwards to being just a developer?"

I'd be working less hours, working remotely (no commute, yay!), getting paid more, working in a really cool domain and writing more code than before. It wasn't a step back in anything other than title (and I could go on about how titles are largely meaningless anyway)

But hey, now I'm back to being a "Senior Software Engineer" so...

I had my first covid vaccination.

This one felt different. I was... excited? It feels like the first step back to some normality (whatever that look like, whenever it comes) for me.

To the countless people that reached out on Twitter, thank you!

Waiting on a callback from my GP re: covid vaccine.

AS SOMEONE WHO IS UTTERLY TERRIFIED OF NEEDLES (shaking, fainting, the whole works): STAB ME NOW.

I've had the Pfizer vaccine, and only one injection so far. I'm not about to run around in crowds without a mask, licking everything I can.

I'll likely still wear masks on public transport (not that I take much even in non-pandemic times) for a while yet. I can't see myself gathering in large crowds for a while, at least not without a mask and knowing vaccines are wide-spread (see reason for wedding rescheduling above!). But it feels like a step towards being able to hug those I love. To hang out with friends and family and see their smiling faces up close rather than through pixels on a screen.

For anyone that might happen to be reading this that's also nervous, I'll paste in a message I sent to someone that reached out to me who was also nervous. My hope is that sharing how it was for me, might help someone else.

So, I’ve fainted at basically every other injection I’ve ever had.

Where I had mine (and this might not be the case everywhere) the process was really smooth. Went in. Waiting in a queue for a few minutes and was asked to go into a room.

The Dr/Nurse in there was super friendly, didn’t have needles directly out on show for me to see as I went in.

I hadn’t mentioned anything about having a phobia / fainting at all by this point, so I told them that I’m terrified and if it’s okay to put some music in my headphones, look the other way and close my eyes.

They said that’s absolutely fine and explained possible side effects to me etc.

I put my AirPods in, put music on, looked away, felt the tiniest of touches on my arm (I thought they were doing the cleaning wipe) and they said it’s all done, told me to sit in the waiting area for 10mins for observation (everyone was doing that) and after 10 mins I left.

The actual injection was so low-fuss that my brain hadn’t really had a chance to even realise that it had happened, they’re super busy getting vaccines done so they’re not faffing around. But they weren’t dismissive or unfriendly at all.

Speak to them when you get yours and I’m sure whoever is doing it will be super nice. I’ve only heard good things about nervous people getting the vaccine.

So far my arms been tender, but I’ve had a shoulder impingement in that arm and haven't been able to lift my arm above my head for 3 weeks now so it could just be that :joy:

I hope when you have yours it’s as smooth as can be, I know how terrifying it can be, and this is the least scary one I’ve ever had. Hand on heart.

Just had my first #Pfizer vaccine! It was done so quick and efficiently that I wasn’t even really aware it had happened.

As someone who’s terrified of needles, the person administering it was so good about things!

Well done to the #NHS!

A pretty good few weeks if you ask me!