It's been one month since I went #FullMonzo, I'm thinking of periodically writing posts on my findings both in my own spending habits, but also in how I'm using Monzo to better manage my money.

Since going #FullMonzo at the end of January 2020, it's been really eye-opening to easily be able to see what sort of things I spend my money on, as well as fun and helpful tinkering with options within Monzo and some connected services.

The salary sorter is a very useful tool to put money into the various pots I want it in when my salary comes in. I thought I wanted this to be automatic (so it happens without any interaction on my part), but I think in reality I like that I control it with a few button clicks, it's not much work.

I like having the committed spending as a separate section in the summary page, as that's not necessarily spending I can control as easily as the rest of my monthly ad-hoc spending on my card. Having it separated helps maintain my mental model that it's a separate thing.

Using IFTTT (covered later in this post) has been a fun experiment!

I'd like a way to have the withdrawal from a pot, and the bill payment merged into a single item in the transaction list. It gets very noisy when bills are paid and there's multiple transactions shown in the list in the app. 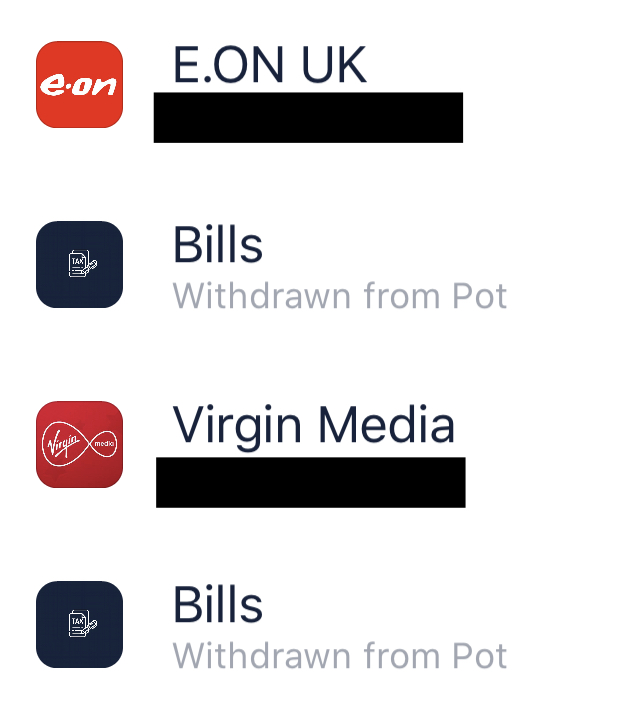 Transport / entertainment / groceries / personal care costs are about what I'd hoped them to be, which is good.

My budget for 'family' stuff (which is mainly things for our pets) is fairly accurate, I went a little over as our African Fat-Tailed gecko needed a trip to the vets to make sure she was okay (she is!) - but other than that, things were generally as expected.

We've been reducing the amount we spend on eating out / takeaway recently, but still spent too much. We've been (mostly) sticking to meal plans which has helped a lot - but habits can be hard to break. Plus there was a couple of celebratory meals out this month for different reasons.

I'm using pots as a more ephemeral way of setting money aside. In March I have a few events coming up and I'm trying out locked pots to set money aside for those things that will unlock on the day of the event. Once the events have come and gone, I'll either remove the pots, or rename them for the next thing I need to set money aside for.

Doing this allows me to:

Ongoing regular pot, used as a place to set money aside that I'd like to keep in addition to my regular savings each month. It's kind of a contingency pot of "I'd like to save this, but it's there just in case" - at the end of the month I move any remaining money to my savings pot. * Savings

Ongoing 'Easy Access' pot, used as a place to put savings into that I can earn some interest on. * Stag Do

Short-term locked pot, used as a place to put money aside for an upcoming stag do for a friend. * Watch

Long-term pot, used as a place to put money aside for a new watch (or two...) I've got my eye on. 👀 * Paris Spending Money

Short-term, used as a place to set money aside for an upcoming trip to Paris with my fiancée for her birthday. * Birthday Stuff

Short-term, used as a place to set money aside for a pre-Paris birthday gathering with friends.

I've been using IFTTT in some form or another since 2012, it's been a fantastic way to automate stuff without having to build everything myself.

I've been tinkering with what I can do with Monzo and IFTTT, I've setup a number of applets to help manage things.

When a receipt is added to a transaction, upload it to Google Drive

I'd like a way to change the date format so they can be better ordered in the folder (something like ISO8601 would be nice instead of the February 1, 2020 at 1224PM format it currently is) but it's not a deal breaker! 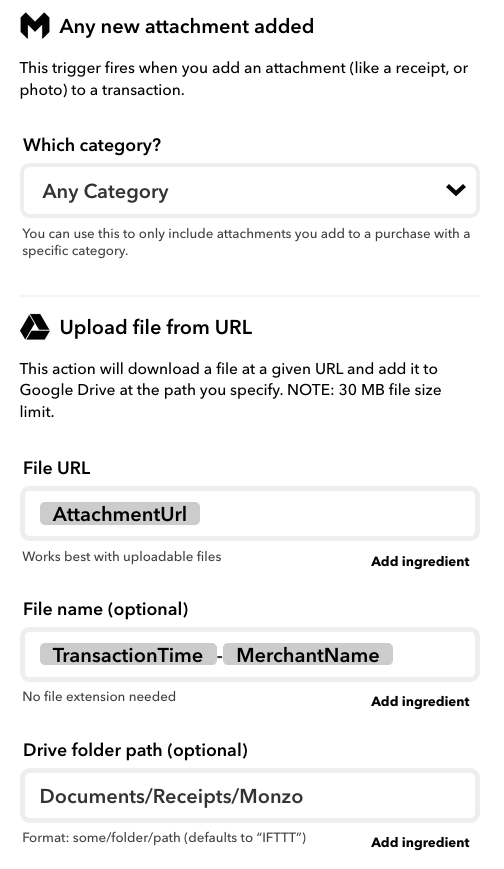 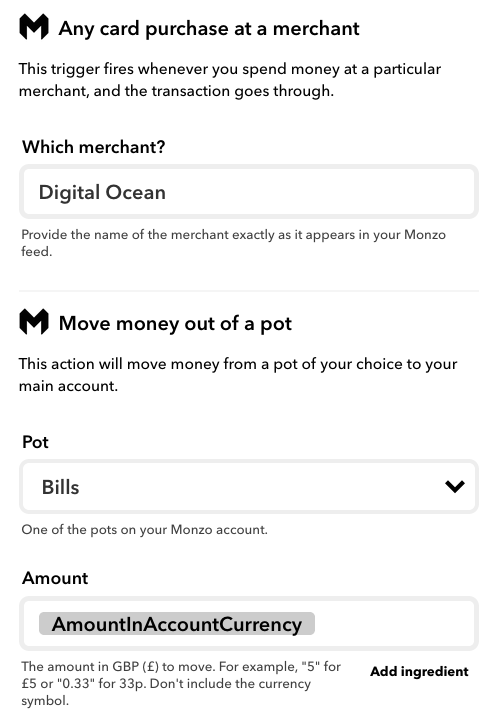 I hadn't considered some recent events, so my spending in a couple of categories was much higher than I'd have liked it to be. However, I'm now using pots to set money aside for upcoming things and planning better beforehand.

I'd like the ability to re-order pots, but that's a 'nice-to-have' rather than a 'must-have'

#FullMonzo after one month has been fantastic.