Having snagged a 3080 Ti for MSRP recently, I ended up building a new system completely, rather than just upgrading the GPU from my old system. It wasn't bad, but I felt I could be pushing the GPU further then the 1st generation Ryzen 7 1800X that I was running before.

I found some decent sales on both new and open-box hardware around the Black Friday / Cyber Monday period and took advantage of them!

The hardware in this post fits the needs well enough and was mostly bought due to being the best thing on offer that was compatible at the time.

I'm also not a fan of unicorn-rainbow-vomit-RGB. Or any lights in my computer really. I haven't bought a case with a windowed panel in a long time. My PC, however powerful it might be sits out of sight at my desk.

I have the full parts list on PC Part Picker, the prices on there aren't reflective of current prices, they're what I paid for things at the time I bought them (monitors and peripherals are from my last system around 4 years ago for example).

I use my PC mostly for gaming. Though, I have also streamed, done video encoding, and occasionally done dev work on it.

I have had some fun running benchmarks to see how fast things can run compared to my old machine, or other systems I have or use regularly. I've run the project I work on at work on it to see how fast it runs our full suite of tests compared to my 2018 13" MacBook Pro (spoiler alert, way faster) so that's where I was coming from with this build.

Also, the name "Shades" comes from the Iron Man suit - I name my systems and builds after things from the Iron Man universe, and as I don't like lights everywhere Shades was a cool name. Also Shades is an extreme heat suit and the 5800X is known to run a little warm so it fits there too 😉

Why: I had considered the 5600X as it's a very good CPU for the money. I saw a 5800X on eBay for a decent price (it was less than a friend paid for their 5600X last year) because it had a damaged box. CPU was fine, box was a bit crushed on one corner. I don't need 8C16T, but it's nice to not have to give up those extra cores (I used to have an 8C16T 1800X) I've left the boosting as is, it's plenty fast for what I need right now. I don't feel like messing about with overclocking and dealing with the potential instability in that. I would have done in years past, now I just want things to work with minimal effort and fuss.

Why: It was cheap after a 20% off eBay offer. Plain and simple. I used to have a fairly high-end X370 motherboard and realised that I didn't really make the full use of it (I bought it because it was in a CPU bundle with an 1800X that was a killer deal back in first-generation Ryzen days). I was originally looking at a B550 board, but when I saw the price of the X570-A Pro board it felt like a no-brainer. When I built with it I also realised it had a right-angle USB3.0 front-panel header and I now want every system I ever build to have this as it's so nice (especially when combined with the flat and more flexible front-panel cable of the Meshify C case)

Why: It was on offer. So it was cheap. I'd been looking at some higher-end air coolers from Noctua and Be Quiet but with the price of this, I just went for an all-in-one liquid cooler again. It's got RGB, but I'll be turning that off as I don't care for it in my systems.

Why: I had 32GB in my old system, and 16GB would likely be fine, but I did like having that extra headroom. I had looked at some 3600MHz CAS 16 kits that would be faster but they were also significantly more expensive. This RAM kit is plain, simple, and fast enough to do a good job.

Why: Because I got one for MSRP.

Jokes aside, I used to have a 1080Ti and it ran things just fine. I don't play many games (mostly Apex Legends, Destiny 2 and occasionally Overwatch), but the ones I did play it would run at 100FPS just fine (my main screen is only 100Hz) but when I got a stock alert of 3080 Ti cards being in stock at MSRP, I decided to just go for it. I've started playing some more games (Cyberpunk 2077) now I can run them at decent settings at a reasonably playable framerate though.

Why: I wasn't originally going to get a new boot drive, I was going to take the PCIe 3.0 one from my old system and use that. But then I would have needed a new drive for my old system to sell it on unless I took the 2.5" SSD instead. So I decided to go for another Black Friday deal on the WD Black SN850 and jump up to the new PCIe 4.0 generation drives. Oh it's fast. Zoom zoom.

Why: This was a drive I had laying around in a DIY external enclosure that wasn't being used for anything so I added it into this system as a secondary drive for less frequently played games and general storage.

Why: I had a 650W PSU in my old system, when I upgraded to the 3080 Ti in that system I needed more power. I managed to get the TX850M for a decent price (PSUs have also been suffering in the global supply shortage at times) and I like and trust Corsair PSUs and have done for years.

I liked the clean and simple aesthetics. Because I put my PC out of sight from where I sit, I don't care for flashy windows, lights and the "OH MY GOD LOOK AT HOW AWESOME I AM" look of so many systems. If that's your thing, cool. But it's just not for me right now.

I wanted something a little smaller than the R5 from my previous build, and the Meshify C was on offer. I liked the front-panel, even thought I wouldn't see it. It allowed for good airflow and had a decent review from Gamers Nexus which was good!

I ended up mounting the AIO CPU cooler in the front of the case as it wouldn't fit in the top (it was blocked by the RAM) and this meant the GPU clearance was really tight. It all fit nicely, but it was a close one! I'm so used to just buying a bigger case and having whatever space I needed that I hadn't considered GPU or RAM clearance for CPU cooler placement! Thankfully I got lucky 😅 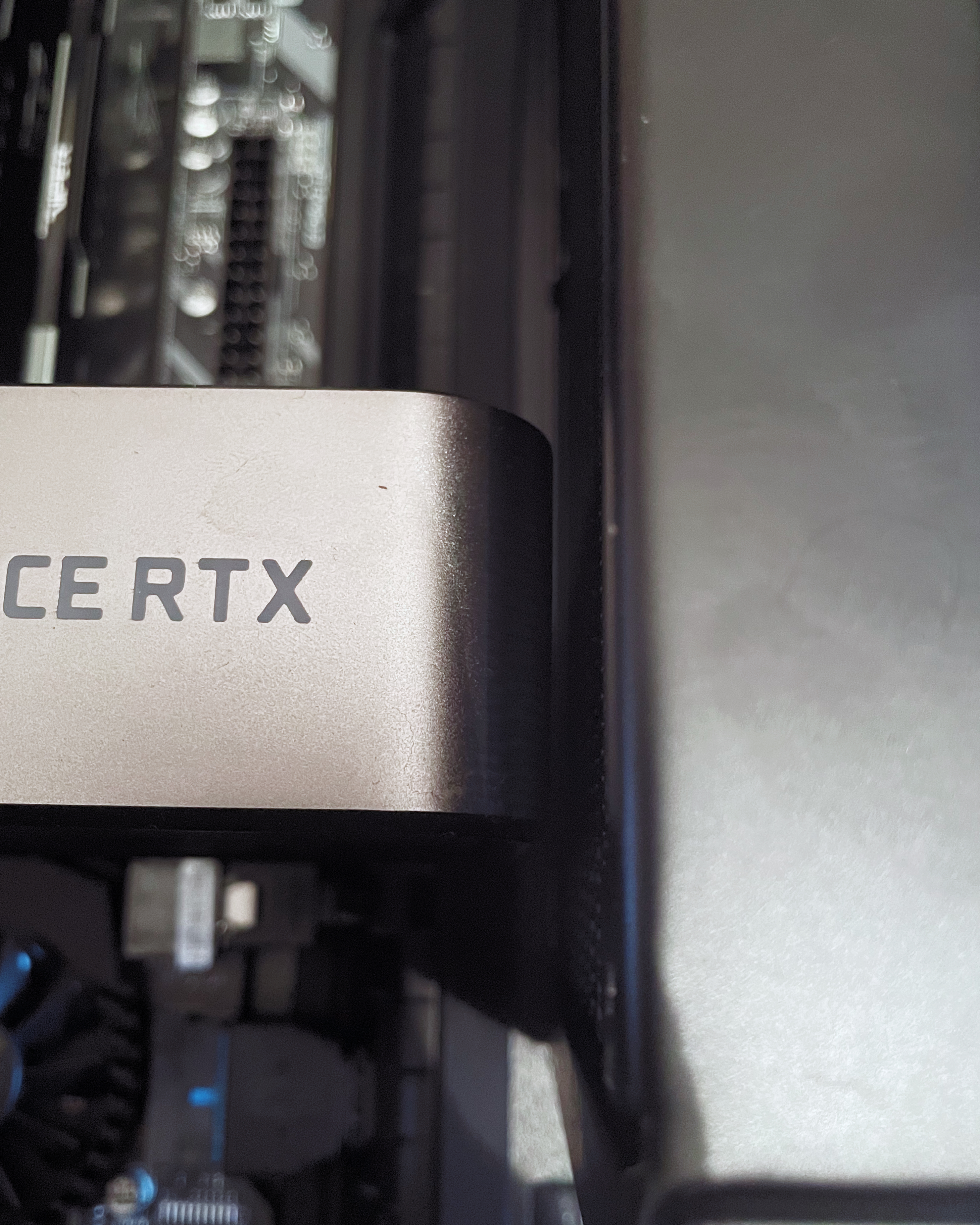 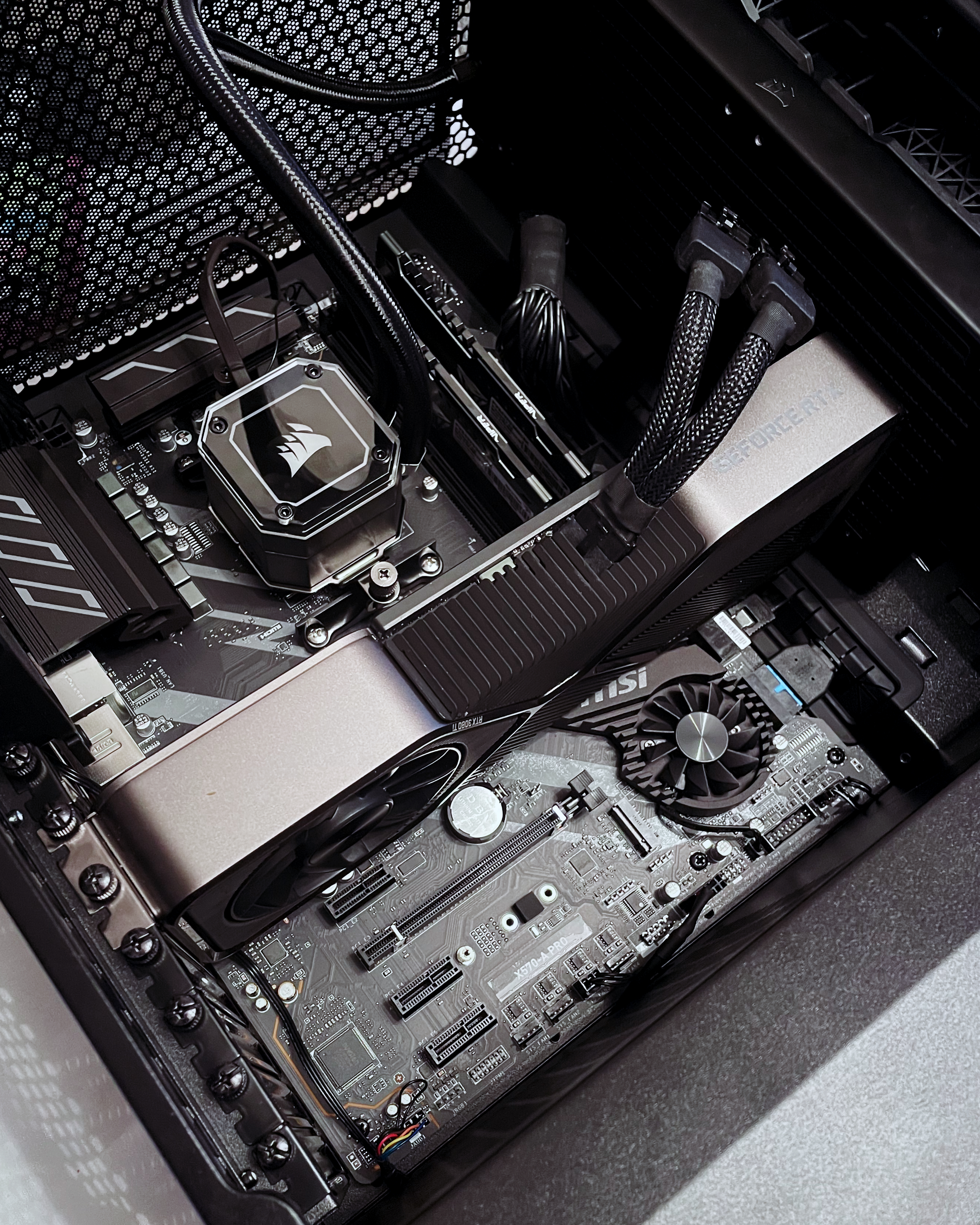